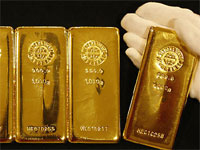 New York: Gold on Wednesday dropped to a 12- week low by losing 2.6 percent as the dollar strengthened on signs the Federal Reserve may refrain from providing more monetary stimulus for the US.

The gold fell by 2.6 percent to USD 1,628.10 an ounce, after touching USD 1,621.50, the lowest since January 10.
Silver also fell by 4.1 percent to USD 31.90 an ounce, the biggest drop since March 14.
The Fed plans to hold off quantitative easing unless economic expansion falters or prices rise at a rate slower than its 2 percent target, according to minutes of policy meeting.
The dollar advanced against the euro for a third day today. Bullion and the greenback tend to move inversely.
Gold also declined as jewelers in India extended a nationwide strike for a 19th day today to protest a tax on non-branded ornaments.
India was world's second-largest bullion consumer in the fourth quarter.

Email ThisBlogThis!Share to TwitterShare to FacebookShare to Pinterest
Tags Gold