Economy makes 2013 a year to forget

New Delhi: Slowing growth and rising inflation marked 2013 which the country's economic managers would like to forget quickly in the hope that the new year will bring in new government and some good news.The growth rate continued to slide throughout the year despite desperate attempts by the government 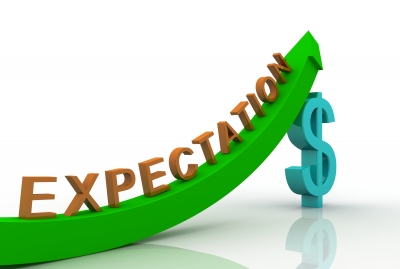 May Millions Of lamps illuminate your life
with endless joy,prosperity,health and wealth
forever,wishing you and your family
Happy Diwali and prosperous new year.
Best Blessing - Rahim Padaniya and Family
Happy Investing


What are the Charges on your Investment ?????

The ministry of consumer affairs may ask the Forward Markets Commission (FMC) to look into suspected conflict of interest between NK Proteins and the National Spot Exchange Ltd (NSEL) following complaints.

Financial Technologies
The complaints by people, who claimed to have visited the warehouses of NK Proteins, also remained skeptical about the stock positions at NSEL godowns, especially of castor seed, castor oil and cotton wash oil, a senior government official said on Monday. 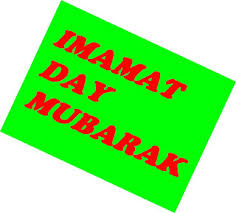 Fifty-six years ago, on the 11th of July 1957, Mawlana Hazar Imam succeeded his grandfather, Mawlana Sultan Mahomed Shah, as the 49th hereditary Imam of the Shia Ismaili Muslims.
In keeping with the 1 400-year old tradition of Muslim leadership, covering all interpretations of Islam, Mawlana Hazar Imam has guided his murids in matters of faith and worked tirelessly to improve the quality and security of their lives. This latter concern extends not only to the Ismailis but all those who share their lives – locally, nationally and internationally.
Mawlana Hazar Imam's vision, as well as the Imamat's institutional capacity to catalyse human development, have been widely recognised by governments, international organisations and civil society institutions. Today, the Imamat’s privileged relationships with many of these enhance its capacity to contribute to human development on a global scale.
Imamat Day is an occasion to reaffirm our allegiance and gratitude to Mawlana Hazar Imam for his benevolence and guidance, and to renew our commitment to the ethics of the faith. On the occasion of the 56th anniversary of Mawlana Hazar Imam’s accession to the Ismaili Imamat, TheIsmaili.org extends warmest Imamat Day wishes to all Ismaili Muslims around the world.
http://www.theismaili.org/cms/1032/Imamat-Day-Mubarak
by padaniya at July 11, 2013 No comments:

Ramadan is the holy month in which Prophet Muhammad (peace be upon him and his family) received the first revelation of the Holy Qur’an. Together with other Muslims, the Ismailis celebrate Ramadan as a month of special felicity “in which the Holy Qur’an was sent down as a guide to humankind…” (Qur’an 2:184).
In Muslim tradition, Ramadan is a time of heightened commitment to piety and purification through special observances such as fasting, the performance of good deeds — including charitable giving and voluntary service — and through personal sacrifices of material comforts. These observances lead to spiritual fulfilment and a sense of renewal.
The fast of Ramadan is among the pillars of the faith: “O believers, fasting has been prescribed for you as it was for those who preceded you that you may be God-fearing” (Qur’an 2:185). Thus, the fast continues a practice which pre-dates Islam, and has been rendered more humane since religion is not intended to be a cause of hardship. Muslims are urged to fast during Ramadan unless one is suffering from any physical ailment or is on a journey, in which case the prescribed period should be made up later in the year (Qur’an 2:184 – 185).
According to general Muslim belief shared by Shia and Sunni alike, the deeper purpose of fasting is understood as that of cultivating and reinforcing the spiritual and moral character of the faithful, who thus live a life of piety and balance, without forsaking the good things of this world bestowed by Allah’s grace (Qur’an 7:31-32). Muslims are expected to practice self-restraint for the sake of Allah’s pleasure, remaining ever conscious of His presence. Such are the truly God-fearing.
The emphasis on human character is especially underlined. A tradition of the Prophet’s beloved daughter, Hazrat Bibi Fatima Zahra asks what benefit accrues to one who fasts if one does not safeguard one’s tongue, ears and limbs. This ethic of self-restraint echoes strictures of the Qur’an: “the hearing, the sight, the heart – all of those shall be questioned.” (Qur’an 17:36). Only when the senses are reined in, does conscience make itself heard, and the soul experience tranquillity, well pleased with itself and well pleasing to its Lord (Qur’an 89:28).
http://www.theismaili.org/cms/784/
by padaniya at July 11, 2013 No comments:

They Are Indian ..Part 2 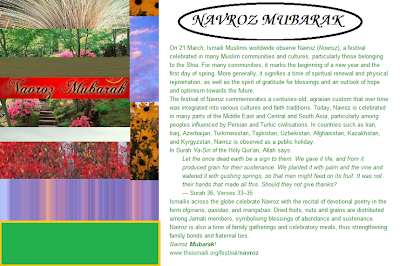 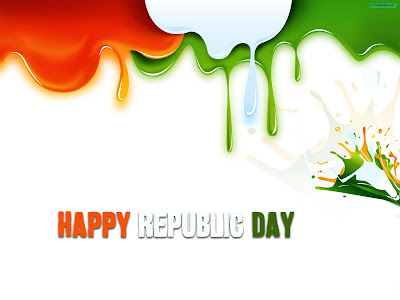